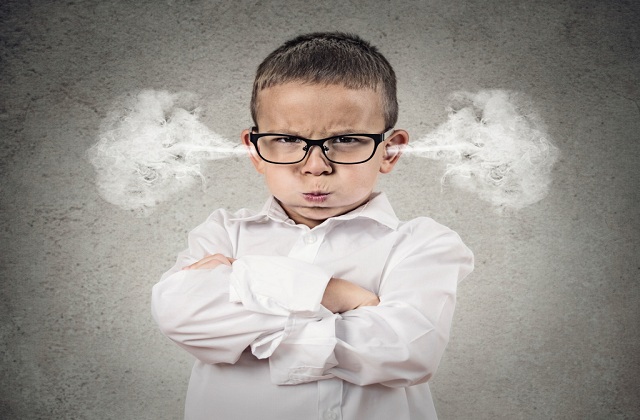 When angry, children may harass, scream, sabotage, or even attack others. What should parents do to help their child learn to control?
A lot of parents think that expressing anger is not good, should not be done and they are not allowed to do it. But on the other hand, restraining emotions for a long time is not entirely good for the psychological development of the child. Children will be more likely to suffer from depression and may have sign of opposing attitude against what adults teach them.
Anger is considered to be a strong emotional reaction, expressing dissatisfaction with something. Like all other human emotions, the child also has feelings of anger. For children, sometimes anger can be a defensive way to avoid feeling pain that may be related to failure, lower self-esteem and isolation of the child; or concerns about situations where the child does not control. However, unlike adults, young children do not have enough experience to control their emotions and how they react when they are angry is also a problem for many parents. When angry, children often take actions that make their parents confused, anxious, or worse… angry. So what do adults need to do when children show anger? And how should we educate children so that they know how to control and behave properly when they are angry?
Things parents should remember about teaching anger control
– Parents need to distinguish between anger and aggression: Some children in anger can throw objects or scold others who made them are angry, so they can be considered as aggressive. But anger is just a temporary feeling for the cause, and aggression is often about intentional attacking and injuring someone or ruining someone’s property for no reason at all. It is important to distinguish this from the assumption that it is an aggressive child. Remember, aggression is a personality, and anger is a temporary emotion.
– Parents are protecting children rather than punishing them because they are angry: Parents should show that they accept their child’s feelings as normal, while still encouraging them to express their emotions in a more positive way.
When parents accept a child’s feelings as normal, they feel comforted because someone understands them, feels sympathy for them; the feeling of comfort will make their nerves calm down, they will be less angry. On the other hand, they also see them as ordinary children, not bad people just because of anger; this makes them less worried about themselves. The empathy of the parents also makes the relationship between the parents and the children getting better.
It is important to show them how to express emotion when they are angry. Because they often do not know how to express their emotions properly, many times they choose the wrong way, such as expressing anger in a violent, rude, ridiculous way.
– Be controlled in any case: First of all, parents should restrain their emotions and then help their children calm down. Make a good example for your children, do not impose your will and your attitude on them.
– Avoid making children more angry when their emotions are exploding in ways such as punishment, scolding or irritation. Make them calm and feel calm with comforting words.

The characteristics required to be a good wife