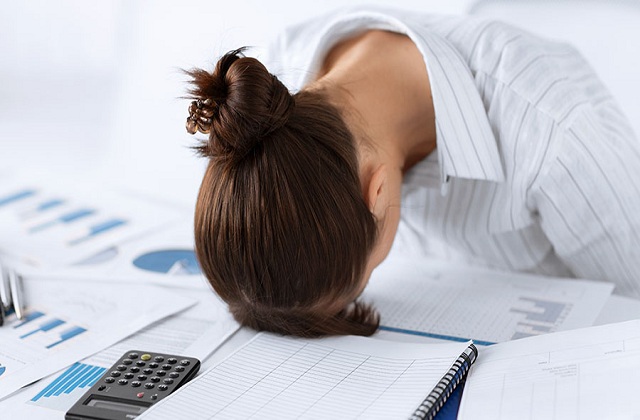 He has a house in the big city, good children, stable wages, but this 45-year-old man has many times tried to commit suicide. Causes determined by the doctor is due to work pressure.
Sitting on a bed at a mental health clinic, with a blank stare in his eyes, the middle-aged man is unable to open his mouth. His younger sister sitting next to him constantly encourages “You have to laugh and talk a lot, take it easy,and you will recover quickly”. Her brother just hummed.
He is calm, quiet, or maybe even sleepy. As a petrol employee with a good salary, he is always worried, afraid of not meeting the work requirement, of being transferred to another place. Four months ago, the man began to have insomnia symptoms, for many days he’d had to use sleeping pills. The situation was getting worse.
He said: “I would like to take a no-paid vacation, hoping to relieve the ability to sleep, but at home I always overthink, no gym, no contact with outsiders, always think that i am a burden for my wife and children. One month ago, the ups and downs that kept chasing my mind made me unable to find a way out. “
According to his sister, he is very nice and gentle. While some people go for a few drinks with friends after work, he on the other hand always goes home to his wife and children, looking forward to pick them up at their school and give them baths. Maybe if he had lived comfortably and less worried, he would not have come to this state. “
Psychiatrist – Mental Health Institute – the doctor who directly treats him says: “Due to the pressure of not completing work (whether real or not), this patient is overthinking, finds it difficult to sleep, he suffers heavy stress, paranoid, and he had tried to hang himself, fortunately his family found him in time and took him to hospital”.
A few days ago another 43-year-old man, who was running a state-owned company, was also hospitalized in a state of panic because he had committed suicide several times. A week later, his condition was not good enough to be released. Whenever someone passes by, he seeks ways to avoid them, curls himself in the blanket in a corner. He speaks so weakly, that one has to approach to his mouth closely to hear clearly what he says.
His wife sat next to him feeding porridge for her husband, then told him to say “Ahhhh”, just like he is a child. “From the day we fell in love, he was having trouble sleeping, but about a year ago or so, with small changes in his staff and his salary, he has worried so much more, got insomnia and sleep deprivation, everyday he has to take pills to sleep”, she says.
His agency cut wages and staff. As a long time bureaucrat, all his work has been indirectly handled, but now he has to collect money directly from the business. The nature of the job changes, the anxiety does not handles well with new things, and that causes more insomnia.
“Many nights I could not sleep, I could not do anything but going out, counting my fingers and waiting for the sunrise. I had headaches, so I had to hit my head against the wall, and after that my head was swollen, and it hurt,” he said.  This man admitted to no less than 10 suicide attempts. This time, he hit his head with a rock and was hospitalized.
According to psychologists, work stress resulting in suicide is a form of psychiatric illness that affects many lives, sometimes affecting even the lives of people around them. These people are required to be hospitalized under the strict supervision of medical staff as well as their family members in order to prevent suicide and to protect their safety.
The initial manifestation of stress is difficulty falling asleep, or irritating to the surroundings, depression and fatigue. For days, patients will be anxious, have uncontrollable behavior. The danger is that negative thoughts such as suicide are a way out of stress.
Psychiatrists also said that in the current period, work stress is a common concern of society. Everyone has to understand that this is a common problem, and find ways to reduce their pressure such as practicing yoga, meditation, communication and physical exercises.
“At the Institute for Mental Health, the incidence of hospitalizations due to stress has increased dramatically recently,” said the psychiatrist.
According to psychiatrists, the most common are the patients suffering from business losses. Not long ago, a 500-million-dollar corporate executive was about to bankrupt. Every month he has to pay the bank interest of 2-3 billion, not including staff salaries. Unable to bear the pressure, he suffered from mental illness. There is another woman lending black credit. When she went bankrupt, she was scared of her husband, afraid of her children, regreted her actions and became mad…
” Patients who are treated early enough stabilize psychologically faster than those who have reached the path of suicide,” added Mental Psychiatry.
According to the World Health Organization, the number of people who commit suicide due to mental illness is higher than the death toll from war and assassination combined, about 1 million per year, in which Latin America accounts for one Big ratio. The main causes of mental illness in this area are the effects of chronic social and economic crises, poor health services, etc.
From 2008 up to now, Asia has had an emerging rate of suicide. South Korea is at the top of the chart, with 24.8 per 100,000 people commit suicide, followed by Japan with 24.

The impact of stress on us?

The stages of Stress

The History of the discovery of Stress